monster brown on the swing

Steve hit the lower river last week, just after the ice broke up. Possibly because they were one of the first boats through that stretch in months but they had an awesome day, landing many, many steelhead and a 31″ brown.

While Steve has landed many larger browns trolling in the big lake and on lures in the river, this is his personal best on a fly and better yet it came on a streamer.

Steve wanted me to also pass along that he has fallen in love with the Cortland, Compact Switch saying, “It’s the only line I’ll use for swinging.” 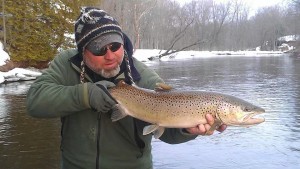