I went from having one of my best days this past Friday to having that followed by a tough weekend, though certainly a ton of people on Saturday didn’t help.

I’m hearing that other area rivers have filled with fresh steelhead the past several days, hopefully this also happens on the PM.

Water levels are getting low and clear in the fly water, though there is still a stain in the Rainbow/Walhalla area.

Steelhead are often egg crazy. You know the old saying, you can fish any fly you want for steelhead as long as it’s an egg. So it has been fun to see the steelhead off eggs to some extent, eager to take small stones, mayfly nymphs and even some big black buggers. 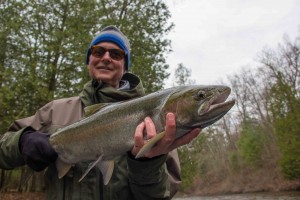