With the help of Cameron Mortenson who you should all know from The Fiberglass Manifesto we are putting on a professional gathering of sorts, we’re calling it Beaver Bash 2014. We’ve pulled talent from across the country, including Arizona, Montana, South Carolina, South Dakota and New York.

They’re on the island as we speak, all with the goal of having fun and catching some pig carp on the endless clear flats of Beaver Island. We’re now on day 4, we’ve had about 2 hours of perfect sunny conditions with the rest grey, cool and tough.

Thankfully this is a group of guys that can make stuff happen even under less than perfect conditions and we’ve got carp to show for it each day. 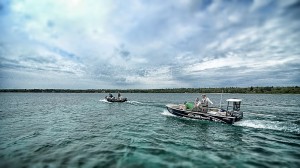