Big Carp- A Nice Start to the Season

Austin arrived on Beaver Island a few days ago. Yesterday he threw his boat in for a little scouting and banged this beast right off the bat. He said it tipped his scale over the forty mark!

As far as numbers, fishing on the islands has been a little slow but the average fish size has been great. My boat hasn’t had anything less than twenty-five with our biggest in the mid thirties.

The big girls are going on the fed before they start spawning. The smaller carp, which are males, either ignore or turn away from our fly offerings. As soon as we get a couple sunny days in a row the spawn will be on but until then the big fish seem to be on the menu. 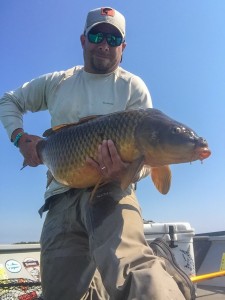