Austin passed along a podcast that Jerry Darkes did on Anchored with April Vokey (you’ll have to scroll down past a few newer casts). Jerry was talking about his book Fly Fishing the Inland Oceans. April and Jerry discuss opportunities throughout the Great Lakes giving a nice mention to Beaver Island near the end of the podcast. 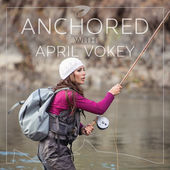