Who would have thought?

As you may have heard the salmon fishing this year has been a little tough, but a recent bright and crisp fall day seemed to smile on us as we arrived at the section of river we had chosen, and seeing almost no other anglers we easily found happy and willing fish.

After a bit we dropped anchor in a new hole and the first cast pulled tight into a big hot salmon that doubled the rod and immediately ran screaming for the brush, taking all of ten seconds to break free and in doing so removed both flies from the end of the line. That hole remained productive and gave up several more fish, a couple of which found their way to the net. Eventually we pulled anchor and headed downstream, that first fish in the back of our minds as we listened the little voice that speaks to all anglers whispering, “would have liked to have seen that one.”

A quarter-mile downstream and three casts into a new hole the rod doubled again and after a few minutes of battle the big salmon moved toward a sandbar where I stood ready to lead the fish into the net. That’s when I saw it: The fish had one of my flies in it’s mouth, which was obviously to be expected, then a few feet up another of my flies, which was hooked to another one of my flies followed by another, the latter two currently attached to our rod. The riggs were hooked together. This was the fish. The first-caster from the hole upstream. The one that almost got away.

We stood in the sun that bright and crisp fall day and smiled into the net.

Who would have thought? 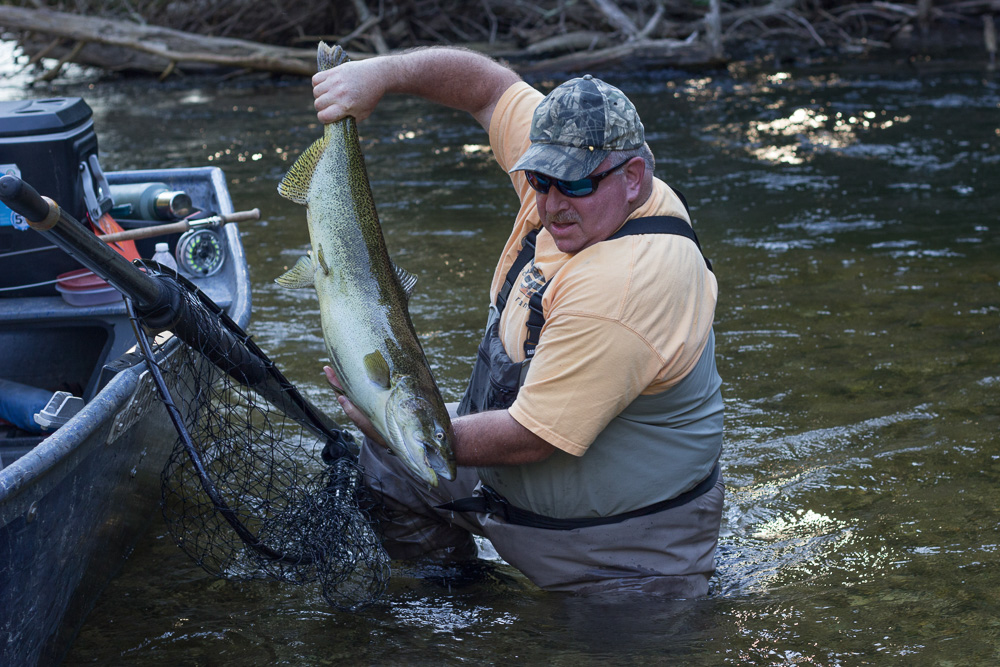