Ian Anderson from FlyMasters of Indianapolis sent the following:

FlyMasters of Indianapolis had the pleasure of hosting a Two Handed casting clinic this past weekend here in Indianapolis. Hardy USA came along to provide rods and Steve Martinez came down from Michigan to instruct everyone. Normally, for this sort of event you do not want dozens of people signing up because it is just too much for one instructor. We set the limit at eight and were pleasantly surprised that we had seven students register. Two of them were actually clients of Steve’s that came all the way from Cincinnati to work on their two handed skills with him.

From the moment that we opened Saturday morning Steve was busy talking with customers and getting to know the students as they arrived. He even helped a few on their single handed casting before the clinic started. Steve was a total professional throughout the entire clinic. His introductory instruction in the classroom was very clear and concise. His organization and instruction on the stream was thorough and attentive. On top of that for 2 1/2 hours he did nothing but walk up and down the line of people helping each person get a firm introduction to the Double Spey, Circle Spey and Snap-T two handed casts.

If you are a shop or a club thinking about bringing in someone to help you, your customers or members get a good solid foundation in two handed casting I highly recommend Steve Martinez. Steve is knowledgeable, professional and has a great sense of humor. Everyone will not only learn something but have a great time in the process.

Thanks to Dave at Pile Cast for the photo.  Dave also posted about the event and has a bunch more photos. 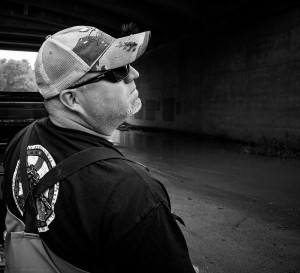