Jeff sent the following email:  “I really liked that TFO reel that we were using last Sunday. The model number that Dave got off the reel is not making any sense when I try to look it up. What is the size and model number of those TFO fly reels.  Thanks again for the pics. We both had a great time and we both learned a lot.”

I have an actual pile of the Temple Fork Outfitters, Large Arbor Reels and these are the reels Jeff is referring to.

Some of my reels are now over six years old and they have been dropped, stepped on, filled with sand, used in hot weather and bitter cold, the list of abuses could go on and on.  Their guide reels, meaning that they get used and abused day in and day out.

I have never done any repairs or maintenance to these reels and they are all still in service.  They are the perfect guide reel for me.

If I had to nitpick two shortcomings in these reels it would be that they are heavy and ugly.  Though I understand that heavy probably means durable and I wouldn’t trade these reels toughness to make them lighter.  TFO has already fixed the ugly issue.  They don’t make the plain flat gray anymore but now offer the reels in three much sharper looking colors. 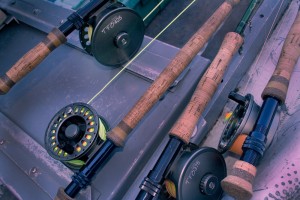